FindingTop is reader-supported. When you buy through links on our site, we may earn an affiliate commission. Learn more about what we do.
By Chris on June 24, 2019 Tools

A compound miter saw is a life saver for any DIYer or finishes carpenter for quick and efficient woodwork. It is not necessarily easy to land a great saw in the market today but if you have narrowed down to Hitachi and DeWalt, you are almost there. These two are the manufacturers of the most durable and reliable 12-inch miter saws in the market. Hitachi C12FDH and DeWalt DW715 are both 15amp motor saws with a 12-inch blade designed for use by both professionals and amateurs. They both have silent operation, well-marked detents at major angles on the miter and very silent operation that allows you to set up indoors. They are seemingly similar which is why a professional opinion is the best way to match one to your needs.

Both new buyers and experienced woodworkers find it hard to choose a favorite between the two because of the matching blade speed at 4000RPM and the similar price range. There are many confusing reviews online regarding these two tools which is why we conducted our own research testing both products and asking experienced users about their experience. We have created reviews below for both tools to let you choose your favorite. You can continue reading below to see our opinion and the results of the research. 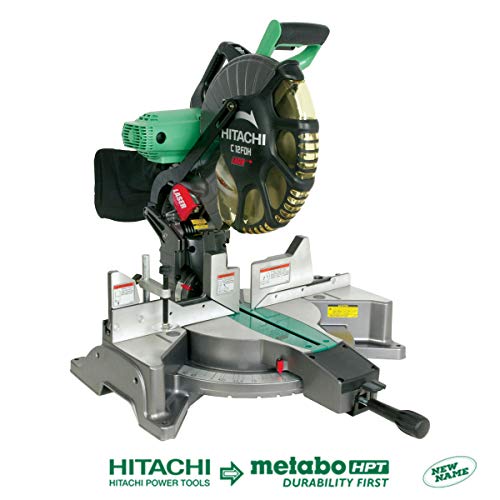 This is a dual bevel miter saw which allows you to perform crown molding and regular lumbar cuts on both sides of your workpiece without having to flip the piece. This makes your crown cuts accurate and quick. It also has a laser pointer that can be moved to the right or left allowing you to cut accurately on both sides of the workpiece.

Like all Hitachi tools, This Miter is designed for professional use but its simple design still makes it a great saw for general home use as well as long as you can handle the specs. It is a rapid cutter featuring a 12-inch 32 teeth carbide blade with a high speed of 4000RPM. This is fast enough to cut through hardwood quickly. Its dual bevel which slides on both sides also allows you to retain your settings by just flipping the bevel at your required angle to resume the same cuts next time.

Its high steel fence allows you to clamp 6 by 4 planks comfortably which improves the precision of your cuts. It has a 15-amp belt driven motor, the most powerful motor of any DIY miter Saw delivering 1900 watts which can do cross cuts into any dense wood without leaving chipped ends. It is also very silent with little vibration at the handle.

It comes fitted with onboard clamps that helps you hold your pieces in place on every project. Its dust bag is also able to collect more of the chaff than most models. The main concern in our reviews was the lack of a safety button on the handle and their failure to include bevel detents. You also have to reach far to the back of the saw to make laser adjustments and lock the bevel. 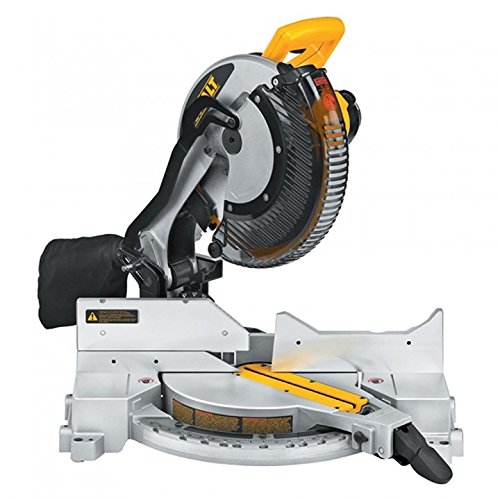 This is DeWalt’s bestseller Miter saw famous for its premium parts and easy controls. It also has a 15-amp motor with a speed of 4000RPM like Hitachi although this is a single bevel saw which means you have to flip your workpiece for double cuts. This is also a powerful miter saw able to handle any lumber needs you may have in a workshop or at home. Its constant cutting speed means it doesn`t leave splinters on the wood or chip it which makes it a great tool for finish and joint cutting.

Unlike Hitachi, this saw has bevel dents at 0°, 33.9°, 45° and 48° which increases your precision when cutting any angle on your workpiece. Its miter also has 11 detents at all major angles and even better, a miter dent override that allows you to set your own cut angle. Its miter lock is all steel making stable stops that increase the accuracy of each cut.

Dewalt also has a greater safety degree featuring a safety button on the handle which keeps you safe if you release the blade while still running at top speed. It also features a high fence with a sliding left fence that can be fully removed for accurate bevel cuts on the workpiece. This saw is also one of the lightest in the market weighing just 42lbs which makes it easy to move from one place to another.

Head to head comparison of DeWalt and Hitachi Miter Saws

This is a major subject because these two tools have matched speeds at 4000RPM speeds because of similar motors. A close view at finished cuts, however, gives Dewalt an upper hand in terms of smooth finishes on dense wood. The Dewalt Miter lock is very sturdy giving it the higher precision cut. The main Hitachi fault is the non-detented bevel with a weak miter lock that may swing slightly if you are not an experienced user. Professional users able to follow the laser marker keenly, however, have no problem with Hitachi.

Both tools are made of ABS plastic and steel, the basic standard for this class of tools. The Hitachi build, however, features many plastics at the controls and miter lock which wears quickly reducing the durable service of the saw. This gives Dewalt a slightly upper hand. Major parts, however, have a matching life potential. Hitachi has easy access brushes that allow you to replace easily whenever you need to, a slight flaw there on Dewalt.

Accurate angle setting is very easy on Dewalt because of the detents on both the miter and the bevel although Hitachi overrides this through the laser guide that highly increases your precision. Both tools are generally easy to operate because of the low lift angle for comfortable lowering, forward and backward blade movement. Controls for the bevel lock setting as well as miter adjustments are easy to access.

The primary reason for using a miter saw instead of a table saw is accuracy and these two are both high precision cutters. The Hitachi has the greatest advantage in this regard because it is a dual bevel able to cut accurate crowns on any side without the need for flipping and resetting. If you follow the laser mark accurately, its bevel cuts will also come out accurate. It is able to make the most complicated cuts which make it a great choice for a workshop

Dewalt`s major angle detents and detent overrides allow you to set accurate cut angles as well. Having to flip your workpiece for dual cuts may need a reset although it is not a reason to give up on its high-quality parts and top-notch operation. In a DIY setting, Dewalt will come in handy for a wide range of cuts although you may encounter trouble making accurate complicated cuts, especially on commercial projects.

Both saws have a strong blade guard and clamp keeping you safe from flying wood splinters and chaff. Dewalt has a safety button on the handle that extends this advantage especially for DIYers and homeowners with little experience with the saw.

We followed each user complain and praise carefully testing the tools to make sure it reflected on the tool and to see if it affected performance. A good saw can only be validated by great performance and in this case, both saws have a top-notch performance which means whatever choice you make, it will not be a mistake. If you follow the guide keenly, you will realize that Hitachi`s high specs need a keen eye to achieve its full advantage because Hitachi manufactures with a professional in focus. This makes it a great tool for a workshop because it can make high precision cutting even for complicated woodwork. It is still easy to use which is why even a homeowner can use it if you want to exploit the great benefits of a dual bevel miter saw worth the money.

Dewalt is a great recommendation for any setting that requires a miter saw. It is very durable and easy to operate which is why many people praise it over other tools. It is true it has premium features, reliable and durable but not without the limits of a single bevel miter saw. It is a great tool for both professionals and amateurs because of the friendly design and sturdy detents on the miter and bevel.

A Miter saw worth the money has to offer reliable long-term service which is why you need to choose the one saw that will prove to be a one-time purchase. This Hitachi C12FDH and Dewalt DW715 comparison has clear details of what the market has to say regarding these two tools. We have no favorite between the two but we have gone through how they both perform on site allowing you to match the right saw to your project whether you need a saw for your projects at home or for commercial grade projects.